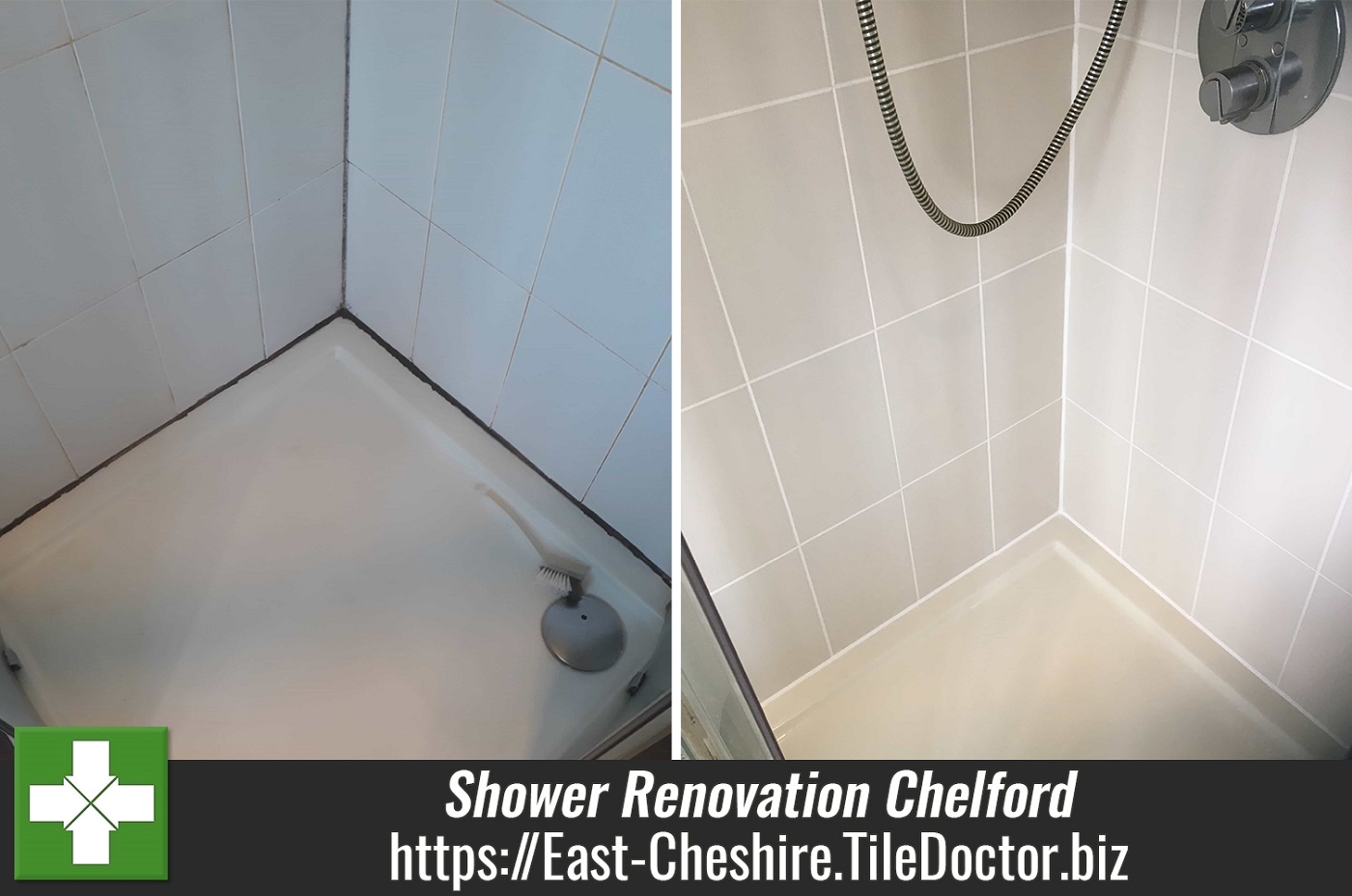 I was asked by a Chelford homeowner (near Alderley Edge) to renovate their Ceramic Tiled Shower Cubicle which had an unsightly mould problem. They say pictures speak louder than words, so I’ve added some photos on this page which show how the grout and silicone sealant had become discoloured with mould over the ten years since it was installed.

Mould likes damp warm areas and shower cubicles make a perfect habitat for it, grout especially can be a problem due to its cementitious rough surface that mould can get a grip on. In this case the ventilation in the ensuite was inadequate and ideally there should have been an extraction vent over the cubicle itself. My advice in these situations is to leave doors and windows open after showering and to run the cold water afterwards.

To renovate the Tile and Grout I sprayed on Tile Doctor Duo-Clean which was left to soak into the grout line for ten minutes before being scrubbed in by hand. The Ceramic tiles cleaned quite easily but the grout had to be scrubbed hard and needed several applications before I was satisfied.

The whole shower needed treating in this fashion and once rinsed and dried I set about stripping out all the old silicone sealant that had also been badly affected by mould. This is done carefully using a sharp knife. I removed the debris and moved onto applying a fresh mould resistant silicone sealant.

Last step before leaving was to spray the Ceramic tile and especially the Grout and Silicone with a can of Tile Doctor Aerosol Grout Sealer. This doesn’t last as long as other sealants in the Tile Doctor range but its quick to apply, especially on wall tiles. The sealer ensures water will run straight off the walls into the shower tray and it also makes the shower easier to clean later.

The shower looked like a new installation by the time I had finished, and my client was delighted with the transformation. He was also thankful that I had replaced the silicone, this was something he had considered doing himself but applying it does take practice and you can get yourself into a mess.

Professional Renovation of an Ensuite Shower Cubicle in East Cheshire

We were contacted by a national builder of luxury homes to see if we could help sort out a grout problem with an expensive Porcelain tiled floor. Whilst most the work we do relates to the cleaning and sealing of tile and stone we also get asked to consult on related issues. On this occasion it turns out their tiler had done a great job tiling the floor with 240m2 of large format porcelain tiles, but the grout used was the wrong colour.

The property affected was in Nether Alderley which is a very desirable part of East Cheshire about a mile south of Alderley Edge. An appointment was arranged with the property developer to inspect the problem and advise on a solution.

On the day of the visit I was advised that they didn’t want to remove and relay the floor as the cost would be prohibitive and the inconvenience to the homeowner excessive. The developer suggested removing the grout and replacing with the right colour however I advised to do so would take a long time also there was a high risk of chipping the tiles.

The remedy I suggested was to recolour the grout lines with a Tile Doctor Grout Colourant. I have used this method successfully before and I could guarantee there would be no dust and minimal inconvenience to the family, it was an obvious solution. The original grout was grey which really stood out against the cream tile however being quite dark it was clear at least two coats of Ivory grout colourant would be needed.

The builder was happy to go ahead with this solution and we arranged a time to come back. The floor was a very large area so the work would take some time to complete.

Recolouring the Grout on a Porcelain Tiled Floor

Working in sections the first job was to wash and scrub the grout lines with Tile Doctor Grout Colourant Pre- Treatment Cleaner which lightly etches and cleans the grout lines to ensure an improved bond with the new colourant.

The grout was then dried off with some gentle assistance with a heat gun to speed up the process. Once dry the next task was to apply the first coat of Ivory colourant. The colourant is applied by dipping a small brush into the colourant then scrubbing it into the grout lines. Any residue left on the tiles is easily wiped off with a baby wipe to leave a nice crisp line. If you’re doing this yourself then it’s worth noting that Tile Doctor sell a Grout Colourant Kit that includes the pre-treater, colourant and the brush.

It took two days to complete the work saving the house builder thousands of pounds, there was no mess and the family were only slightly inconvenienced. The builder was that impressed we did six more homes on that estate and I understand he has since used the same process with another Tile Doctor in Yorkshire.

Another advantage of the grout colourant is that it forms an impervious layer over the grout, effectively sealing it in and making it much easier to keep clean going forward.

This customer lives in the small yet sought after village of Mottram St Andrew near Alderley Edge in East Cheshire. I was asked to do something about the Travertine tiled floors which had become an eye sore due to many black holes and pits that where appearing. This is not an unusual problem for Travertine, it’s a very porous and Acid Sensitive stone so it’s not a good idea to use powerful acidic cleaning products which are quite common in supermarkets. They reduce the life of the sealer and can actually eat into the travertine. Pitting is also a common with this type of stone and easily traps dirt, so we always recommend having the pits filled.

I visited the property to survey the floor and re-assured the owner the problems could be resolved, and the floors appearance restored. The floor was installed throughout much of the ground floor and as I suspected the previous sealer had worn down with use and now dirt was becoming ingrained in the pits and pores of the stone making it impossible to keep clean.

To restore the appearance of the Travertine the tiles would need to be polished using a set of Burnishing Pads that would cut through the dirt and polish the stone. Before starting however, I made sure any exposed woodwork was protected which included removing the kickboards from underneath the kitchen units.

The first pad was a coarse 400 grit which fits onto a rotary machine and is applied to the Travertine tiles with water spread which acts as a lubrication. The pads literally scratch off the dirt and the resultant slurry is then removed with a wet vacuum. The floor is then washed, and the process was repeated with the next two pads which are 800 and 1500 grit, again using water to lubricate (although less than the 400-grit) and rinsing and extracting in between the application of each pad. These higher grit pads are much finer and slowly restore the finish of the stone.

There was a lot of surface area to cover so this process took up the whole of the first day and the floor was then left to dry off overnight.

When I came back the next morning, I finished off the burnishing process using the last floor pad in the Burnishing set which is applied dry to the floor with a few squirts of water. This final pad is 3000 grit which is super fine and builds up a high gloss shine on the Travertine, it also leaves the floor dry and ready to be sealed.

I then sealed the floor using a single coat of Tile Doctor Colour Grow which is an impregnating sealer that soaks into the Travertine occupying the pores and preventing dirt from becoming ingrained into the stone. Colour Grow also enhances the natural colours in the stone and in this case, it did a great job of bringing out the brown shades in the Travertine.

The next step was to fill the holes in the Travertine throughout using appropriate colours of stone filler. The filler is left to dry and harden before the excess is polished off using a white buffing pad. Once done the floor is vacuumed to remove dust before applying another coat of Colour Grow sealer which was allowed to dry before giving the floor a final polish with a new 3000-grit burnishing pad to achieve a deep shine. Given the size of the floor I was able to work in sections, polishing, sealing, filling etc, moving onto the next section as the sealer dried.

The process made a huge difference to the floor which now looks much lighter and is not spoilt by the dark patches brought about by the pitting.

According to the Mirror Newspaper Alderley Edge with its restaurants and bars is a playground for footballers; well I certainly didn’t bump into any on a recent visit there to clean and seal this lovely Spanish Terracotta Tiled Kitchen floor.

Joking aside it is a very nice area and fortunately for me the residents are very partial to stone floors. Getting back to the post, we were asked for advice on cleaning and sealing ninety square metres of Spanish Terracotta tiles that had been installed in this kitchen four years prior. The sealer had since worn off and the floor was becoming difficult to clean effectively.

Terracotta tiles are made from soft clay making it very porous and likely to absorb anything that lands on it; as a result, it’s important to maintain the sealer to stop this happening.

To clean the floor, I soaked the tiles in a strong dilution of Tile Doctor Remove and Go which is a strong stripping and cleaning solution which removes old sealers and also draws out ingrained stains.

After twenty to thirty minutes the solution was worked into the tiles using a black scrubbing pad fitted to a rotary machine. The soiled solution was then removed with a wet vacuum and this was followed by scrubbing the grout lines with Tile Doctor Pro-Clean and a grout brush until they were clean.

The whole floor was then rinsed with water to remove any soil and trace of cleaning product. The water was then extracted using the wet vacuum. The floor was then checked to make sure it was as clean as it could be and stubborn areas spot treated.

The floor was left to dry off overnight and we returned the next day and tested the tiles with a damp meter making sure it was dry before we could seal it. To seal the floor I first applied a single coat of Tile Doctor Colour Grow which soaks into the pores of the tile to enhance its colours. Once this was dry it was followed up by multiple coats of Tile Doctor Seal and Go which adds further protection and adds a nice sheen to the tile.

I took some time to complete due to the porosity of the Terracotta requiring nine coats before the tiles were fully sealed but once done it was transformed and I left a very happy costumer. A quick tip here is that you can always tell when a tile is fully sealed by adding a small drop of water to the tile, if it forms into a bubble then it’s fully sealed.