This customer lives in the small yet sought after village of Mottram St Andrew near Alderley Edge in East Cheshire. I was asked to do something about the Travertine tiled floors which had become an eye sore due to many black holes and pits that where appearing. This is not an unusual problem for Travertine, it’s a very porous and Acid Sensitive stone so it’s not a good idea to use powerful acidic cleaning products which are quite common in supermarkets. They reduce the life of the sealer and can actually eat into the travertine. Pitting is also a common with this type of stone and easily traps dirt, so we always recommend having the pits filled.

I visited the property to survey the floor and re-assured the owner the problems could be resolved, and the floors appearance restored. The floor was installed throughout much of the ground floor and as I suspected the previous sealer had worn down with use and now dirt was becoming ingrained in the pits and pores of the stone making it impossible to keep clean.

To restore the appearance of the Travertine the tiles would need to be polished using a set of Burnishing Pads that would cut through the dirt and polish the stone. Before starting however, I made sure any exposed woodwork was protected which included removing the kickboards from underneath the kitchen units.

The first pad was a coarse 400 grit which fits onto a rotary machine and is applied to the Travertine tiles with water spread which acts as a lubrication. The pads literally scratch off the dirt and the resultant slurry is then removed with a wet vacuum. The floor is then washed, and the process was repeated with the next two pads which are 800 and 1500 grit, again using water to lubricate (although less than the 400-grit) and rinsing and extracting in between the application of each pad. These higher grit pads are much finer and slowly restore the finish of the stone.

There was a lot of surface area to cover so this process took up the whole of the first day and the floor was then left to dry off overnight.

When I came back the next morning, I finished off the burnishing process using the last floor pad in the Burnishing set which is applied dry to the floor with a few squirts of water. This final pad is 3000 grit which is super fine and builds up a high gloss shine on the Travertine, it also leaves the floor dry and ready to be sealed.

I then sealed the floor using a single coat of Tile Doctor Colour Grow which is an impregnating sealer that soaks into the Travertine occupying the pores and preventing dirt from becoming ingrained into the stone. Colour Grow also enhances the natural colours in the stone and in this case, it did a great job of bringing out the brown shades in the Travertine.

The next step was to fill the holes in the Travertine throughout using appropriate colours of stone filler. The filler is left to dry and harden before the excess is polished off using a white buffing pad. Once done the floor is vacuumed to remove dust before applying another coat of Colour Grow sealer which was allowed to dry before giving the floor a final polish with a new 3000-grit burnishing pad to achieve a deep shine. Given the size of the floor I was able to work in sections, polishing, sealing, filling etc, moving onto the next section as the sealer dried.

The process made a huge difference to the floor which now looks much lighter and is not spoilt by the dark patches brought about by the pitting. 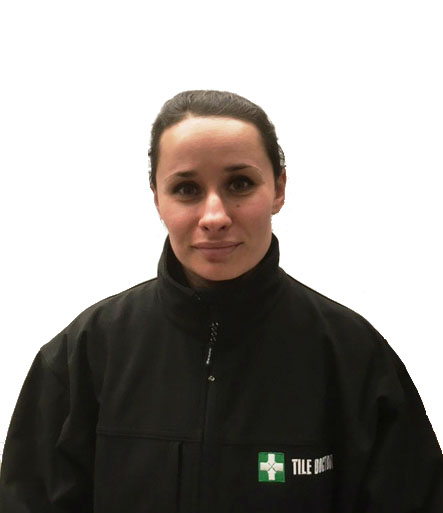 Kamila worked very hard and made our travertine floor look as good as new – in fact even amazing.
Ted S, Bolton

Excellent results, better than I expected! And Kamilla is a lovely person to deal with, thanks.
Paul H, Chadderton

Kamila was very prompt . She was polite and explained exactly what the job entailed . Very happy with her work and the results . Thanks Kamila
Peter B, Congleton

Kamilla was incredible, she absolutely transformed our bathrooms! They look amazing! She then did another great job of the downstairs grout colour, the tiles look like they have just been laid! SO impressed, Kamilla is so clean and tidy and lovely to have around. Highly recommended!
Claire O, Brereton

Kamila was excellent. Totally transformed the tiles in our kitchen and we will be booking her in to do the hallway and utility. Absolute pleasure to have in the house for 2 days. No mess. Excellent.
Ian K, Macclesfield